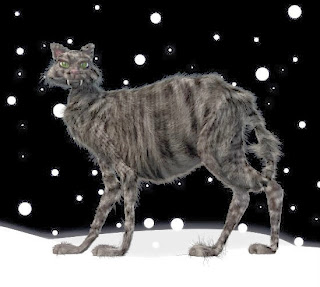 Thus far we have covered that Gryla, her lazy ogre-husband, and their 13 trollish spawn all live in a cave in the countryside of Iceland.  But there's yet one inhabitant of their cave that we have not yet covered.  Today's subject of choice of their house pet, the monstrous Yule Cat. 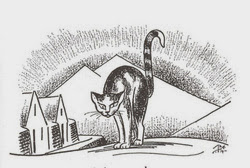 The Yule Cat is an enormous and vicious feline which spends most of its time in its cave either lazing around or likely being harassed by the rambunctious Yule Lads.  However, at Christmas time the cat leaves the cave and ventures out into the towns and city's searching for- you guessed it -people to devour.  Have you ever watched a cat eat a mouse?  It can be pretty gross.  Chomp chomp crunch. 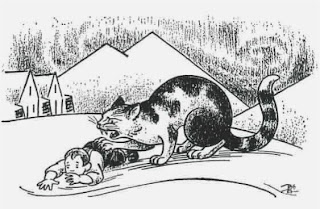 The Yule Cat, however, doesn't have a taste so much for naughty children, as one might expect.  The Yule Cat is hungry for a different flavor of child.  Lurking in the icy countryside, the Yule Cat stalks those who have not received new clothes by Christmas Eve.  Honestly, it eats up people who haven't bothered to get a new outfit for the holidays. 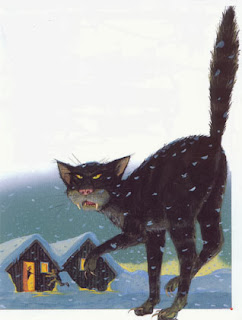 There are multiple proposed reasons for it's appetite.  The one that makes the most sense to me is that the threat of being eaten by the Yule Cat was used by farmers as an incentive for their workers to finish processing the autumn wool before Christmas. The ones who took part in the work would be rewarded with new clothes, but otherwise they would get nothing and thus be preyed upon by the monstrous cat. But I have heard other theories that relate more to children being grubby and not showing their respect to the Holiday and its various sacred implications that would thus make them seen as food by the cat.  The cat has alternatively, though much less popularly, been interpreted as merely eating away the food of ones without new clothes during Christmas feasts. 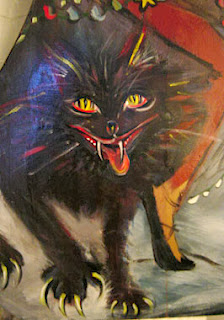 The man-eating pet of the Yule Lads is a pretty strange tradition that gained its popularity from the same poem that the Lads themselves did, but its roots probably go far deeper.  The concept of troll families having "troll cats" is not anything new. In old- and exceptionally weird folklore -A troll cat, milk rabbit, or troll ball was the familiar of a witch.  Taking either in the shape of a cat or a ball, troll cats sucked milk from cows and spat it out in the witches' milk pails, and went into homes to lick up cream. 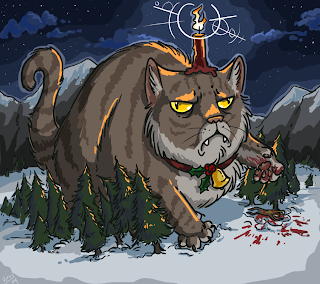 In recent years the Yule Cat has gained a lot of popularity as part of the Gryla/Yule Lad legend and can be found in a number of merchandise, from books, to cards, to figurines used as Christmas decorations. So make sure you get yourself and your loved ones a new outfit for this Christmas or else you might find either yourself or someone you care about all ground up inside a massive, gooey, hairball on Christmas morning.
Posted by Anthony at 12:12 PM