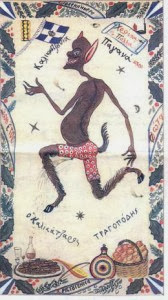 For those of you who think the 12 days of Christmas are only full of drummers, lords a leapin, a random assortment of birds, and a pear tree: THINK AGAIN!  In my research into the depths of Christmas traditions 'round the world- and particularly the more pagan roots of its mythos -it has become glaringly apparent that the United States of America has more or less done everything in its power to remove any and all things sinister from this Holiday season.  That's not to say elsewhere it isn't a time of merriment as well- because it is -but apparently everybody else thinks you cannot have a proper amount of light without a proper amount of dark to counter it. 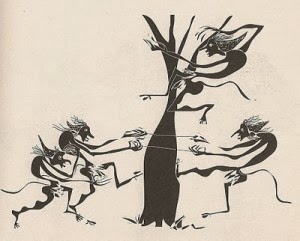 Thus is the case with a little creature known as the Kallikantzaros.  Or, in plural numbers, the Kallikantzaroi.  There is a somewhat popular comic book and film franchise called 30 Days of Night, the premise of which is that in Barrow Alaska there is a period of thirty days in the winter when the sun doesn't rise at all, and during those 30 days the town is essentially massacred by a horde of vampires.  It's depicted as the sort of gut churning terror one might expect to find in a Saw or Hostel film.  Well, the tale of the Kallikantzaroi is more or less the same premise, only it's 12 days of Christmas rather than 30 days of night. These Greek monsters are subterranean dwellers, and only come to the surface around the time of Winter Solstice, during what is known commonly as the 12 Days of Christmas.  From December 25th to January 6th, when the sun barely rises if at all, these monsters crawl on up and more or less cause as much damage and carnage as possible. 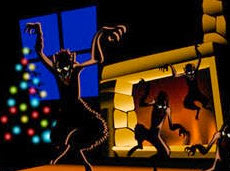 On the third day of Christmas my true love gave to me, a horrible blood thirsty gremlin.  But don't worry too much.  These little flesh-eaters, though malicious to the core, are not a major danger to humans.  Though there are occasional stories of Yuletide Jollies ripping off a face or two, they are pretty easily outsmarted. 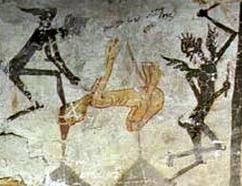 Because the Kallikantzaroi live underground, they are creatures primarily of the night.  Light causes extreme pain to their mostly blind eyes.  So one method of protection is to leave the fire burning in the fireplace, all night, so that they cannot enter through the chimney (sort of like an anti-Santa). In some areas, they would burn the Yule log, a large piece of wood, for the duration of the twelve days. And in other areas, people would throw smelly shoes in the fire in hopes that the stink would repulse the Kallikantzaroi and force it to move on to another house. Yet there are other, more clever ways to keep them away.  One, you could mark your door with a black cross on Christmas Eve and burn incense.  The holiness repels them I guess.  Another common plan during the days when the Kallikantzaroi were loose was to leave a colander on your doorstep to trick the visiting Kallikantzaros. Since he could not count above 2 (3 is a holy number and they don't like church, I suppose) the Kalikantzaros would sit at the doorstep compulsively counting, "1, 2... 1, 2..." each hole of the colander, all night, until the sun rose and he was forced to hide.  Effective. 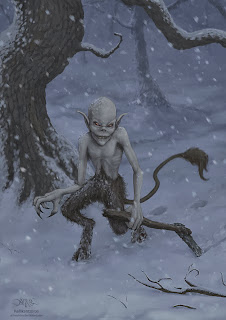 There are a lot of ties between the tales of these guys to other European abominations like werewolves and vampires.  Legend has it that any child born during the twelve days of Christmas was in danger of transforming to a Kallikantzaros for each Christmas season, starting with adulthood. The antidote: Binding the baby in tresses of garlic or straw, or singeing the child's toenails. In another legend, anyone born on a Saturday can see and talk with the Kallikantzaroi.  Why?  I couldn't tell you. 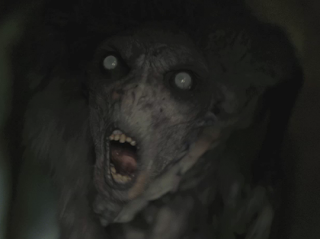 So beware the hordes of Christmas Goblins who will undoubtedly rise on Christmas night and ravage our world for twelve long, dark, days!  If Christmas is a silent and holy night, the twelve nights after are surely nights of insane panic and bloody chaos.
Posted by Anthony at 2:30 PM