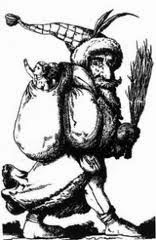 Santa's origins, as I had previously stated, are old.  Predating traditions of Christianity, more likely than not.   And as I have stated earlier as well, when the Santa we know first rolled around there was something pretty wild about him.  Literally.  He lived in the woods, in caves, in cabins, and so on.  He was a man of nature.  But he was that way even before he became the Santa Claus we look to today. 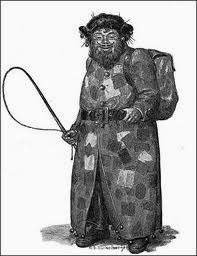 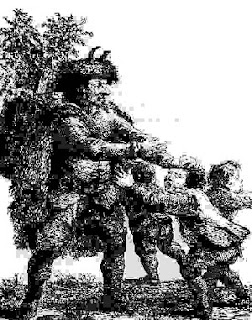 If we had a scale, and on one end you have the modern Santa Claus, and on the other you had Krampus, somewhere in the middle would be Belsnickel.  Belsnickel is a wild man, very much resembling Santa- and in some communities recognized as Santa himself, rather than a companion.  Belsnickel is a crotchety, fur-clad Christmas gift-bringer figure in the folklore of the Palatinate region of southwestern Germany along the Rhine, the Saarland, and the Odenwald area of Baden-Württemberg, though the figure is also preserved in Pennsylvania Dutch communities. Belsnickel shows up at houses one or two weeks before Christmas. He is typically very ragged and mean looking. He wears torn, tattered, and dirty clothes, or animal furs and skins, and he carries a switch in his hand with which to beat bad children. The children usually escape unharmed, but they are scared into being good so that Santa will bring them presents on Christmas.  The tradition also exists in parts of Newfoundland, the prairie provinces of Canada and some communities in the Brazilian state of Santa Catarina. 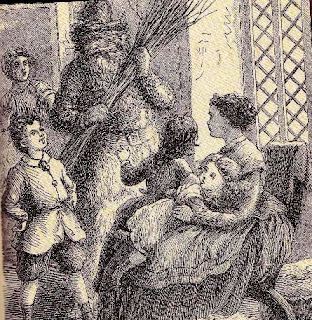 One thing about Belsnickel, however, is that he is not strictly a tormentor.  Scary and harsh though he may be, he is unlike Krampus who's primary functions seems to be punishment.  He can most assuredly dish it out when needs be, however, if the children have behaved properly and are prepared for his visit, he will toss treats out to them as reward.  Equal parts benevolent and scary, he was also equally loved and feared by children depending on their behavior.  Naughty kids beware!  But good kids really enjoyed him just as much as Santa. 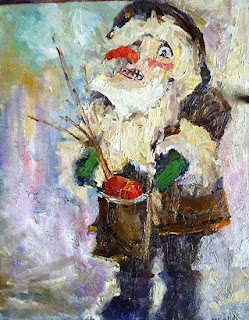 He should also not be confused with characters like Père Fouettard, which is French for The Whipping Father.  Whipping Father is a character who accompanies St. Nicholas in his rounds during St. Nicholas' Day (6 December) dispensing lumps of coal and/or floggings to the naughty children while St. Nick gives gifts to the well behaved.  He is known mainly in the far north and eastern regions of France and in the south of Belgium, although similar characters exist all over Europe, like Knecht Ruprecht, a German bloke who's name translates to Farmhand Rupert- which is a beyond hilarious name. Tradition holds that he appeared in homes on Christmas Eve, with Saint Nick, and was a man with a long beard wearing fur or covered in pea-straw, carrying a long staff and a bag of ashes, and wore little bells on his clothes.  He dished out beatings via bag of ashes, or horrible gifts like twigs and coal while Saint Nick gave out good presents.  Unlike these characters, Belsnickel works alone, or has his own accomplices, but does not accompany whichever Santa-proper is in that region. 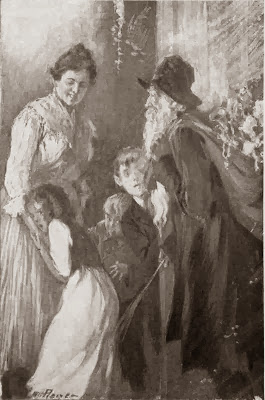 A lone creepy woodsman, Belsnickel also very likely has ties to other, older, pagan figures which will be discussed in later blog posts.  As we will learn, Krampus, Satna, Belsnickel, and a whole host of other Santa-esque characters all have their roots in ancient traditions.