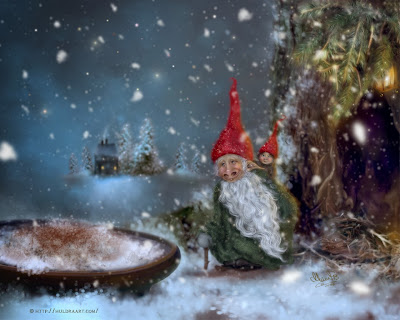 The Tomte, or the Nisse -which are different names of the same Scandinavian Folk-Creature- are sort of a mix between dwarves, nymphs, and trolls.  In the end what they probably resemble most to the modern American is a garden gnome.  Long white beards, tall red hats, and living generally under the ground or in little caves. 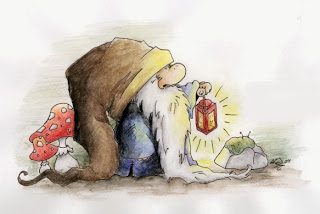 The Tomte was preceded, as mentioned in prior posts, by the Yule Goat. Based on tradition, these Yule Goats appeared on Christmas Eve, knocked on the door of a household, and handed out presents to the children.  The Yule Goat was soon replaced, however, by the Tomte, or the Nisse, in those regions. According to tradition, they secretly live in a house- or at least nearby on the plot of land, like in barns, under the soil, or in burial mounds -and act as its guardian.  They protect children and animals from evil and misfortune, and are said to be excellent at helping with chores and farm work.  However, they are known to have a temper, especially when they are offended. 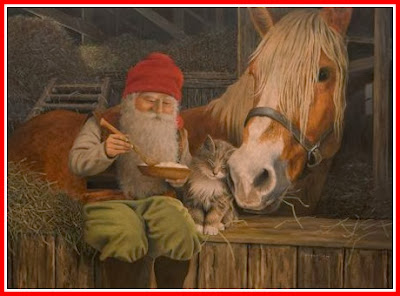 Despite their smallness, the tomte/nisse possess crazy amounts strength. Even though they are generally  protective and caring, when offended their retributions ranged from small pranks to more sociopathical punishments like killing off the livestock or ruining of the farm's fortune. The tomte/nisse are traditionalists who did not like changes in the way things were done at the farm, which could result in offending them. Another easy way to offend them was rudeness: farm workers swearing, urinating in the barns, or not treating the creatures well would be soundly thrashed. If anyone spilled something on the floor in the house it was wise to shout a warning to the tomte below. One was also required to please the tomte with gifts – a particular gift being a bowl of porridge on Christmas night. If the tomte was not given his payment, he would leave the farm or house, or engage in mischief such as tying the cows' tails together in the barn, turning objects upside-down, stealing, breaking things, or anything worse one could imagine. The tomte liked his porridge with a pat of butter on the top. 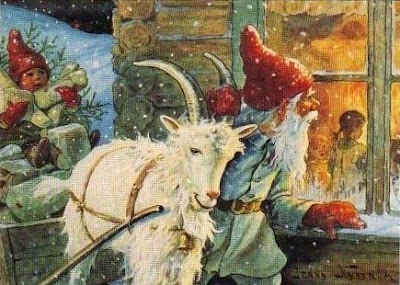 In an often retold story, a farmer put the butter underneath the porridge. When the tomte of his farmstead found that the butter was missing, he was filled with rage and killed the cow resting in the barn. But, as he thus became hungry, he went back to his porridge and ate it, and so found the butter at the bottom of the bowl.  Full of grief, he then hurried to search the lands to find another farmer with an identical cow, and replaced the former with the latter.  In another popular folktale a Norwegian maid decided to eat the porridge herself, and ended up severely beaten by the nisse. The farmer found her nearly lifeless the morning after. 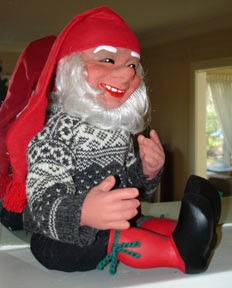 The tomte is connected to farm animals in general, but his most treasured animal was the horse. Belief had it that one could see which horse was the tomte's favourite as it would be especially healthy and well taken care of. Sometimes the tomte would even braid its hair and tail, and undoing those braids could bring on the wrath of an upset tomte. 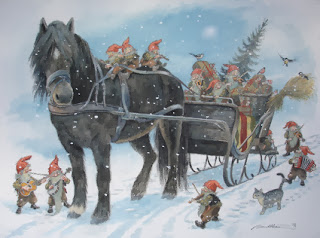 In the 1840s the farm's nisse became the bearer of Christmas presents in Denmark, and was then called julenisse (Yule Nisse). In 1881, the Swedish magazine Ny Illustrerad Tidning published Viktor Rydberg's poem "Tomten", where the tomte is alone in the cold Christmas night, pondering the mysteries of life and death. This poem featured the first painting by Jenny Nyström of this traditional Swedish mythical character which she turned into the white-bearded, red-capped friendly figure associated with Christmas ever since. Shortly afterwards, and obviously influenced by the emerging Father Christmas traditions as well as the new Danish tradition, a variant of the tomte/nisse, called the jultomte in Sweden and julenisse in Norway, started bringing the Christmas presents in Sweden and Norway, instead of the traditional julbock Yule Goat.  Gradually, commercialism has made him look more and more like the American Santa Claus, but the Swedish jultomte, the Norwegian julenisse, the Danish julemand and the Finnish joulupukki (in Finland he is still called the Yule Goat, although his animal features have disappeared, which we will talk about here in a few days) still has features and traditions that are rooted in the local culture. He doesn't live on the North Pole, but perhaps in a forest nearby, or in Denmark he lives on Greenland, and in Finland he lives in Lapland; he doesn’t come down the chimney at night, but through the front door, delivering the presents directly to the children, just like the Yule Goat did; he is not overweight; and even if he nowadays sometimes rides in a sleigh drawn by reindeer, instead of just walking around with his sack, his reindeer don’t fly - and in Sweden, Denmark and Norway some still put out a bowl of porridge for him on Christmas Eve- less he get grumpy and tie knots in their pets' fur. He is still often pictured on Christmas cards and house and garden decorations as the little man of Jenny Nyström's imagination, often with a horse or cat, or riding on a goat or in a sled pulled by a goat, and for many people the idea of the farm tomte still lives on, if only in the imagination and literature.