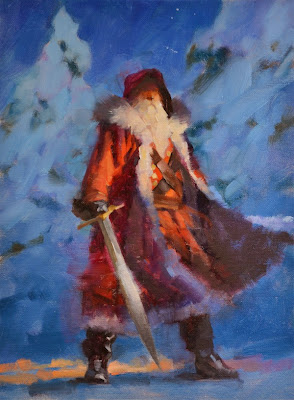 Ok so I've spent the past two days talking about weird place holders who stand in the stead of the great Santa Claus.  But what about the real Santa himself?  I plan to post something later talking about the modern Santa we all know and love, but it is not this post.  This post is, perhaps more accurately, about Santa's good old roots. 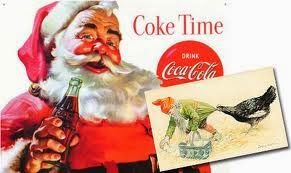 These days, Santa is capable of offering more or less any sort of gift you could want, including clothing, licensed merch, electronics, you name it.  In most contemporary portrayals, his fortress in the North Pole is heavily inspired by the movements of industry.  His workshop is often a high tech factory in which the elves do more to oversee manufacturing processes rather than build anything themselves.  In fact, some recent interpretations of the myth actually have Santa's factory as more of a distributor, like a massive Amazon.com warehouse or something.  In fact, Forbes magazine actually listed Santa as the most wealthy fictional character of all time, with a net worth sitting comfortably at a value of infinity.  Not a joke. 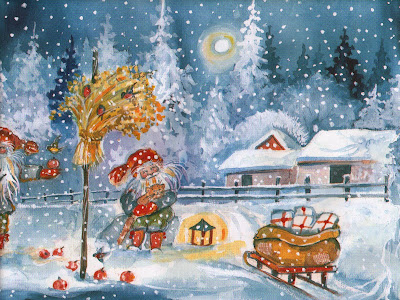 But in spite of all the modern manufacturing and distributing these days, we are all probably pretty familiar still with the Santa who had a workshop in which toys were built either by himself or by his ocean of elf employees.  Santa's workshop, as I had imagined it, was a place where skilled workers used woodworking, hammers, nails, springs, cogs, and clock making skills to make pretty simple stuff.  Slinky toys, wind up mechanical toys, wooden horses, little dollies, and the like.  Yes, sometimes we have been lead to believe the elves manufacture licensed products (I'm a big fan of the portrayal in Elf where they are building toys you can go pickup at nearly any local toy store), but generally it's more simple stuff, or at least in a simple cabin-esque type of workshop. 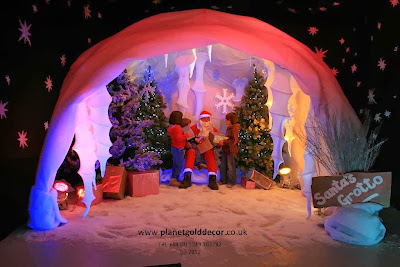 But Santa's workshop wasn't always the castle/cottage/cabin type of setup we often see on tv.  No.  Originally, Santa was popularly thought to be a cave dweller.  His place of residence was often referred to as Santa's Grotto.  Even the idea of "mall Santas" originated during the age of Santa living in a cave. Taken from the Wikipedia article on the subject: "In the 20th century it became common during December in large shops or department stores to have a cavern in which an actor dressed up as Santa Claus would give gifts to children. Grottos can be large walk-through fantasy cavern-like areas incorporating animatronic characters such as elves and pantomime characters. This tradition started in Britain in 1879 and then extended in the 1890s to Australian and American department stores seeking to attract customers. The world's first Christmas grotto was in Lewis's Bon Marche Department Store in Liverpool, England. The grotto was opened in 1879, entitled "Christmas Fairyland". A staple of Liverpool's festive season, many generations first visited Father Christmas here, with the final displays covering over 10,000 square feet (930 m2). The Grotto has now moved to Rapid Hardware’s store in the former George Henry Lee (John Lewis) building. In Adelaide, South Australia, the first "Magic Cave" was set up in 1896 at the John Martin's department store on Rundle Street. An annual store-sponsored parade, Adelaide Christmas Pageant, was initiated in 1933 during which Father Christmas was conducted to the Magic Cave to formally herald the holiday season. Since the closure of John Martin's, the David Jones stores, have continued the tradition of the Magic Cave but no where near to the extent John Martin's did, in Adelaide as well as in other Australian capitals while the annual South Australia parade marked its 75th anniversary in 2007. Nowadays department stores and shopping centres in the UK still host Santa's Grottos.It is traditional that the children receive a toy from Father Christmas upon visiting his Grotto be it in a shopping mall or a little garden centre. Grottos are sometimes free and sometimes they charge parents to let their kids see Santa and receive a surprise gift." 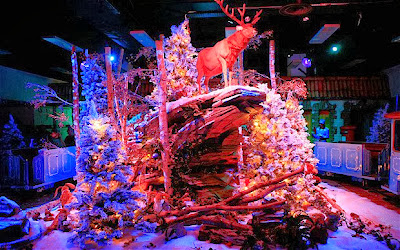 The thing that makes this pretty interesting, at least to me, is that it points out something I am trying to make fairly apparent in this blog- the Santa we generally know with the rosy cheeks, neatly kept beard, wife, shined boots, and mega corporation at his disposal is not the original Santa Claus.  Santa is often predated by much more primal folklorish creatures.  Characters like Krampus existed in pagan tradition long before Santa took the reigns.  Woodland beings like elves, dwarves, gnomes, and the like- the things that existed out in the wilderness -are the literal parentage of Santa.  So it makes sense that we originally felt he lived in a home similar to that of a troll.  There is also plenty of evidence to suggest that Santa is an amalgamation of Nordic and Germanic pagan gods like Thor and Odin.  Taken again from Wikipedia: "Prior to Christianization, the Germanic peoples (including the English; Old English geola or guili) celebrated a midwinter event called Yule. With the Christianization of Germanic Europe, numerous traditions were absorbed from Yuletide celebrations into modern Christmas. During this period, supernatural and ghostly occurrences were said to increase in frequency, such as the Wild Hunt, a ghostly procession through the sky. The leader of the wild hunt is frequently attested as the god Odin and he bears the Old Norse names Jólnir, meaning "yule figure" and the name Langbarðr, meaning "long-beard" (see list of names of Odin). The god Odin's role during the Yuletide period has been theorized as having influenced concepts of St. Nicholas in a variety of facets, including his long white beard and his gray horse for nightly rides (see Odin's horse Sleipnir), which was traded for reindeer in North America. Margaret Baker comments that "The appearance of Santa Claus or Father Christmas, whose day is 25th of December, owes much to Odin, the old blue-hooded, cloaked, white-bearded Giftbringer of the north, who rode the midwinter sky on his eight-footed steed Sleipnir, visiting his people with gifts. … Odin, transformed into Father Christmas, then Santa Claus, prospered with St Nicholas and the Christchild became a leading player on the Christmas stage."" 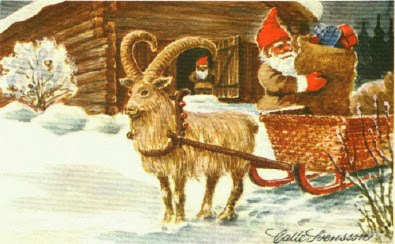 In fact, in many Northern European countries Santa is claimed to be a member of a race of fairy people called Tomten- or perhaps more readily recognized by Americans, Gnomes.  The Tomten are amongst the first people's who settled in the north land in  Norse Mythology, meaning Santa- aside from the Ancient Gods and Giants themselves, would literally be among the oldest peoples of the earth.  I guess that's why I tend to like a Christmas, as I said in my first post, that's filled with monsters and fairy tale creatures.  Much of the mythos of Christmas isn't just taking idea and concepts from high mythology, but is literally taken directly from it.  And that's probably why I- and, as I've discovered, numerous others, tend to get in a mood for films and stories in the fantasy genre during this time of year.  Harry Potter, Lord of the Rings, Narnia, The Wizard of Oz and The Hobbit all have associations with the Holiday season much more so than with other seasons. 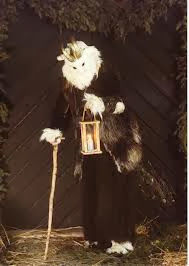 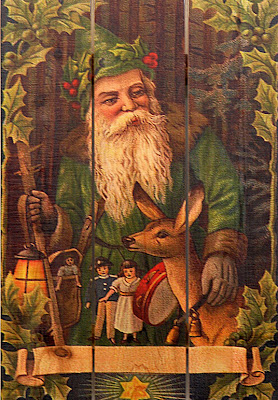 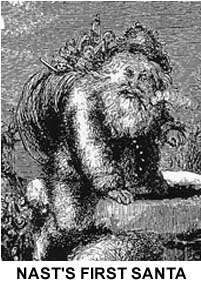 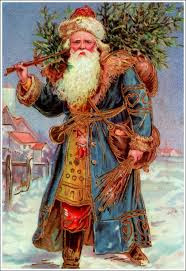 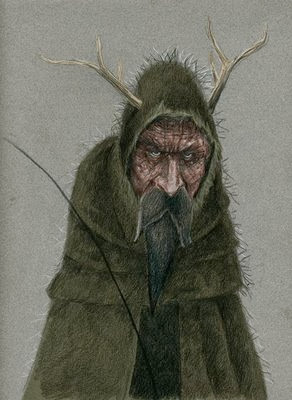 So, while we all generally accept that Santa who wears nice designer mittens and takes in long draughts of Coke and transforms occasionally into Tim Allen- just remember that the real Santa is a much different guy.  He is a wild-man.  He lives in the northern wilds of Lapland- the very fringes of not only civilization but the natural world as well.  He is alone, isolated, battling the harsh elements as he lives an eternal existence.  Year after year he embarks on a trek across the world to just bring cheer and gifts to people- which stands in stark contrast to the world in which he lives which is harsh and full of horrible creepy little animals.  I personally prefer that version of Santa.  Why does he do what he does?  What makes him tick?  There's something very complex and engaging to be found there.  It changes from some weird story about a fat guy with toys to a rich mythology about someone much closer to a Tolkien character or being from Prose Edda.  And I dig that. 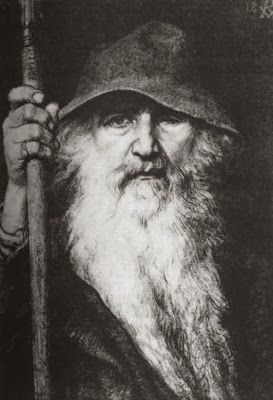 Again, if you have any interest in this sort of idea I strongly suggest checking out Rare Exports: A Christmas Tale, Troll Hunter, and Let The Right One In.