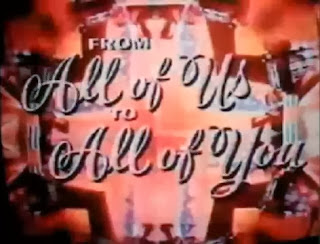 On the sixth day of Christmas my true love gave to me six geese a' layin'.  But today I was actually a little more interested in discussing ducks.  Or rather, one duck in particular.  Donald Duck.  Taking a shift from my usual grotesque dips into Christmas lore, but also not straying away from my Nordic Countries of choice, I'd like to discuss this ultimately fairly weird Christmas tradition from Scandinavia. 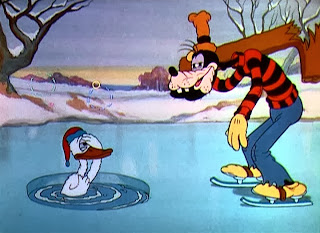 From All of Us to All of You is an animated television Christmas special, produced by the good ol' Walt Disney mega-corporation and first shown on December 19, 1958 as part of the Walt Disney Presents anthology series that was pretty popular at the time. The show was hosted by Jiminy Cricket along with Mickey Mouse and Tinkerbell, and combined newly produced animation with clips from vintage animated Disney shorts and feature films, presented to the viewer as "Christmas cards" from the various characters starring in each one.  Back before the days of home video and interweb streaming, this was pretty much the only way anyone could get their Disney fix on a lot of cartoons, so it was a pretty big deal when the Walt Disney Presents show came around.  Starting in 1963 and continuing through the 1970s, re-airings of the special would include preview footage of the studio's new or upcoming feature films as well, and beginning in 1983, it was expanded to 90 minutes and retitled A Disney Channel Christmas for airing on cable television's The Disney Channel. A home video version of the special, retitled Jiminy Cricket's Christmas, appeared on VHS and laserdisc in 1986. 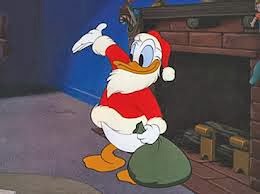 But since then, it's more or less disappeared on US television screens.  Airings of the special are either entirely infrequent or shown never.  But in the Nordic countries and United Kingdom the show has been broadcast every year since 1959, and has become a holiday classic.  In fact, in many countries whenever a network has contemplated not showing the special there has been massive backlash from fans and petitions and been put back on air. Ratings show that around 40% of all Swedes watch it on Christmas Eve, the record (in 1997) being just over half the population. 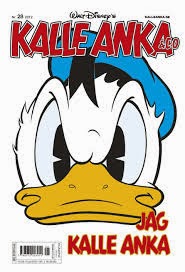 Another weird thing here is that every country has a different version of the special.  Different cartoons are spliced into different version- some being very Christmas oriented and others not so much -as well as entirely different openings and closings. In Denmark the show is called Disneys Juleshow: Fra Alle Os til Alle Jer ("Disney's Christmas Show: From All of Us to All of You") and is broadcast every Christmas Eve afternoon on DR1. It is narrated by Danish actor Ove Sprogøe and clips from feature films are voiced in Danish while shorts are in English with Danish subtitles.  It ends with Bjørn Tidmand singing "When You Wish upon a Star" in Danish ("Når Du Ser et Stjerneskud") and a surprise sneak peek of either an upcoming or a clip from a recently released Disney movie.  In Finland, this show is called Samu Sirkan joulutervehdys, ("Jiminy Cricket's Christmas Greeting") and it is shown every Christmas Eve evening on MTV3.  A special "surprise" clip (from a recent or upcoming Disney feature premiere) is dubbed in Finnish but everything else is in English, with Finnish subtitles.  In Norway, the show is called Donald Duck og vennene hans ("Donald Duck and his friends") on NRK and Disneys julekavalkade (Disney's Christmas Cavalcade) on TV Norge in 2003, and it is shown every Christmas Eve afternoon on NRK1. Most of the shorts are shown in their original English-speaking versions, with Norwegian subtitles.  In Sweden, the show is called Kalle Anka och hans vänner önskar God Jul ("Donald Duck and His Friends Wish You a Merry Christmas"). It is broadcast on SVT at 3 PM every Christmas Eve, in connection to the all-day traditional holiday programme previously led by Arne Weise. The title reflects the fact that Donald Duck is far more popular than Mickey Mouse in Sweden.The montage is narrated by Bengt Feldreich dubbing the original English voice of Jiminy Cricket (but the dubbing is split from this character as Feldreich refers to Cricket in third person at the end).The show is one of the most popular shows all year in Sweden. Every year the viewers number between 3 million and 4.5 million in a country with just more than 9 million inhabitants. Few TV shows fetch more viewers, among these are Melodifestivalen/Eurovision Song Contest and certain major sports broadcasts.  It is positively a required classic for their Christmas season.  Just as important as having a Christmas Tree. 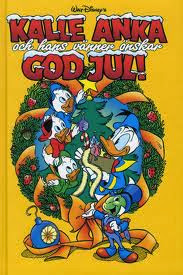 Part of what is really interesting here is that in many countries this special is billed as a Donald Duck special- and in those countries there are often more Donald cartoons spliced into it.  While Mickey is the obvious choice of Disney's star character (probably with Jimminy Cricket in second- his song is their company's theme song afterall) in Nordic countries Donald Duck is EXTREMELY popular. 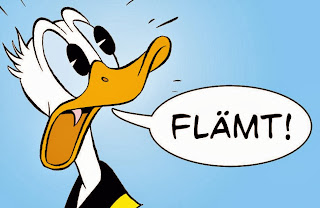 In the mid-1930s, Robert S. Hartman, a German who served as a representative of Walt Disney, visited Sweden to supervise the merchandise distribution. Hartman found a studio called L'Ateljé Dekoratör, which produced illustrated cards that were published by Sagokonst. Since the Disney characters on the cards appeared to be exactly 'on-model', Hartman asked the studio to create a local version of the English-language Mickey Mouse Weekly Magazine. In 1937 L'Ateljé Dekoratör began publishing Musse Pigg Tidningen (Mickey Mouse Magazine), which had high production values and spanned 23 issues; most of the magazine's content came from local producers, while some material consisted of reprints from Mickey Mouse Weekly. The comic anthology ended in 1938 and Hartman helped Disney establish offices in all Nordic countries before he left Disney in 1941.  But during that time Donald emerged as the most popular of the Disney characters in Scandinavia, and Scandinavians often recognize him either on par or better than Mickey Mouse. Kalle Anka & Co, Donald's first dedicated Swedish anthology, started in September 1948. In 2001 the Finnish Post Office issued a stamp set to commemorate the 50th year anniversary of Donald's presence in Finland. By 2005 around one out of every four Norwegians read the Norwegian edition Donald Duck & Co. per week, translating to around 1.3 million regular readers. During the same year, every week 434,000 Swedes read it.  By 2005 in Finland the Donald Duck anthology Aku Ankka sold 270,000 copies per issue. Tim Pilcher and Brad Books, authors of The Essential Guide to World Comics, described the Donald anthologies as "the Scandinavian equivalent of the UK's Beano or Dandy, a comic that generations have grown up with, from grandparents to grandchildren," and copies of the original are cited as the most valuable comic book one can own in Scandinavia.  Finnish and Swedish voters placing "protest votes" typically write "Donald Duck" as the candidate until a 2006 change in voting laws, which prohibited voting for nonexistent candidates. In a twenty-year span Donald won enough votes to be, in theory, Sweden's ninth-most popular political organization. 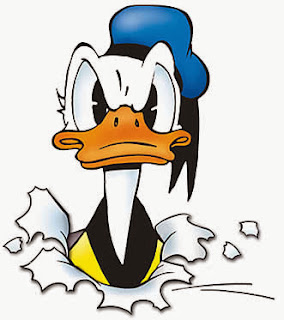 Interestingly, in spite of this Christmas special's popularity this special has yet to see a DVD release.  So if you think your Christmas is lacking a certain amount of birds, might I suggest you start injecting it with a little bit of Donald Duck.