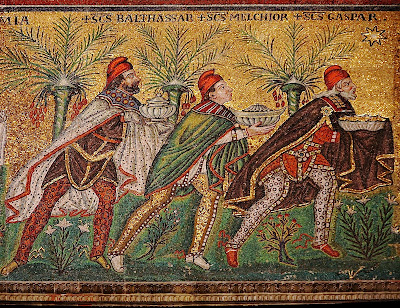 At long last, I have arrived at a post a few of your have asked about: something involving The Nativity.   As is obvious, Xmas has some pretty strong ties these days to the birth of Jesus Christ (and contrary to rumor that the X in Xmas is meant to cut out Christ's name, the X actually comes from the Greek letter Chi, which is the first letter of the Greek word Χριστός -which comes into English as "Christ"). While the birth year of Jesus is estimated among modern historians to have been between 7 and 2 BC, the exact month and day of his birth are unknown.  I know, weird, Christmas isn't Jesus' birthday.  But, for reasons, the early-to-mid 4th century, the Western Christian Church had placed Christmas on December 25, a date later adopted in the East, although some churches celebrate on the December 25 of the older Julian calendar- which corresponds to January in the modern-day Gregorian calendar. The date of Christmas may have initially been chosen to correspond with the day exactly nine months after early Christians believed Jesus to have been conceived, or with one or more ancient polytheistic festivals that occurred near southern solstice- which would make ocean's worth of sense since pretty much everything we do to celebrate this holiday has pagan roots as this blog has so gleefully pointed out. 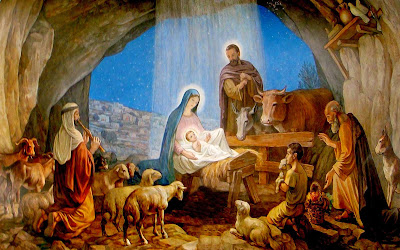 Now, the story of Christ's birth is pretty simple.  Mary was impregnated via the Spirit of God, and as such was still considered a virgin since she did not engage in carnal sexual intercourse.  Hence, she is known by many as The Virgin Mary, particularly in Catholicism.  Mary was due to marry a local carpenter named Joseph, and they were married (and both informed that Mary was giving birth to Christ via angels... so that song "Mary did you know?" is absolutely moronic because she was apparently very well informed).  Well, tax season came around and as such certain folk had to travel from where they lived to other places, so Joseph and Mary packed up and headed for Bethlehem.  Once there, they found that there was no room in any of the inns and so they had to stay in a stable (which many agree was likely more of a converted cave type structure) and there, in that humble place where livestock was kept, Jesus was born.  As a sign of his birth a bright star appeared in the sky, and people followed it to where he was- namely, Shepherds. As such, to celebrate the birth of Christ at Christmas time, many people display nativity scenes, which are tiny replicas of the event.  Most scenes include baby Jesus in a manger,  Mary, Joseph, some shepherds, a few animals, and maybe a star overhead and an angel.  But another ever present group included are the three magi, also known as the three kings or the three wise men. 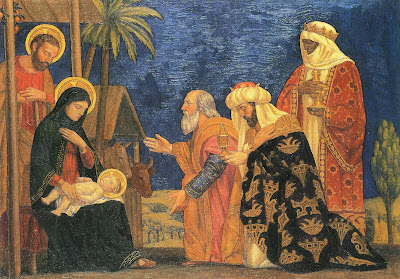 The wise men are usually depicted as three kings, usually accompanied by camels.  In the story, they are seeking Jesus- and are ever so often depicted as some sort of wizard/astronomers in media, using the star to find the prophesied Christ -and along the way they stop and take a breather with King Herod in Jerusalem.  Now, Herod knew the prophecy as well, which told of a new king being born, and fearing that the baby Jesus would grow up and usurp power, Herod was mega keen on finding and slaying him.  As such he ordered all male children throughout the land to be slaughtered.  The wise men ventured on and when they found Jesus they offered him gifts of gold, frankincense, and myrrh. 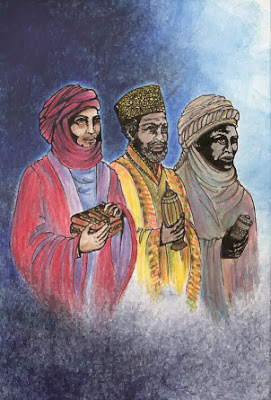 In popular tradition the wise men also tend to have unique characteristics. They even have names.  There is Melchior, usually a Persian scholar of sorts, Caspar, often Indian, and Balthazar, who is Arabian.  And they are all present in Nativity Scenes often paying their homage to the newborn.  But the interesting thing here is, pretty much all of their story and depiction is bunk.  Out of all of the gospels in the New Testament, they are only mentioned in one, which is Matthew.  And their account is as follows:
In the time of King Herod, after Jesus was born in Bethlehem of Judea, wise men from the East came to Jerusalem, asking, "Where is the child who has been born king of the Jews? For we observed his star at its rising, and have come to pay him homage." When King Herod heard this, he was frightened and all Jerusalem with him; and calling together all the chief priests and scribes of the people, he inquired of them where the Messiah was to be born. They told him, "In Bethlehem of Judea; for so it has been written by the prophet: 'And you, Bethlehem, in the land of Judah, are by no means least among the rulers of Judah; for from you shall come a ruler who is to shepherd my people Israel.'" Then Herod secretly called for the wise men and learned from them the exact time when the star had appeared. Then he sent them to Bethlehem, saying, "Go and search diligently for the child; and when you have found him, bring me word so that I may also go and pay him homage." When they had heard the king, they set out; and there, ahead of them, went the star that they had seen at its rising, until it stopped over the place where the child was. When they saw that the star had stopped, they were overwhelmed with joy. On entering the house, they saw the child with Mary his mother; and they knelt down and paid him homage. Then, opening their treasure chests, they offered him gifts of gold, frankincense, and myrrh. And having been warned in a dream not to return to Herod, they left for their own country by another path. 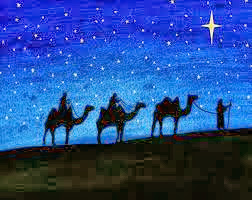 Not only are we never told their names, but we also don't know their country of origin, or even their occupation.  We don't know if they were kings, scholars, astronomers, wizards, or prophets any more than we know if they were carpenters, toymakers, lion tamers, and traders.  Their identification as kings in later Christian writings has been often linked to Psalms 72:11, which says, "May all kings fall down before him."  But ultimately we don't really know.  We also don't know how many of them were present.  The account never says.  It could have been three, two, ten, or fifty.  We don't know.  And interestingly, while the Western world often holds to the tradition of three wise men, the Eastern world has often interpreted it as twelve. 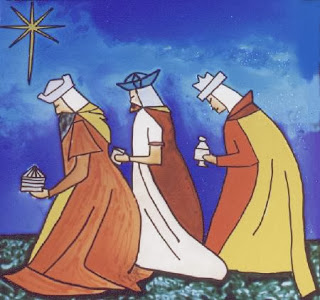 On top of not knowing who they were at all, or how many of them were present, we are also told they did not arrive at the time when Jesus lay in his manger.  They were not at Bethlehem on the night of his birth.  They arrived quite some time later, and at the home of Jesus, Mary, and Joseph, not his birthplace.  Ultimately, our popular concept of the Biblical Magi is about as accurate and true as our concept of Santa Claus.  And while many often try to focus on the Nativity rather than the more "pagan" traditions (even though all of those have been corrupted and changed beyond recognition for the most part), it seems that there are significant portions of the Nativity story that are really more mythological than historical. 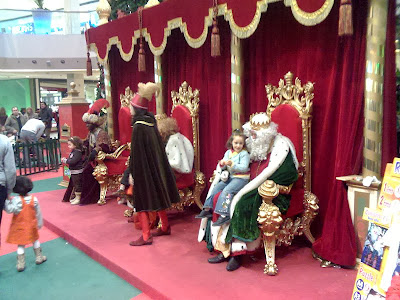 Interestingly, comparing the Magi to Santa isn't all to far off in some countries.  There are several places around the world that actually celebrate the arrival of the magi with customs very similar to Yule Lads, Santa, or La Befana.  The Wise Men will come sit in thrones at shopping malls even and receive children to come sit on their laps and tell them their wishes.  Weirdly this, this almost makes more sense than Santa/Befana/Pukki visiting because The Magi actually brought gifts to a child in their original story.
Posted by Anthony at 12:43 AM