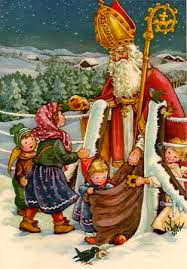 So who is this Saint Nick chap, anyway?  How did the monstrous pukki become a kindly red-wearin' white-bearded saintly fellow?  Well, as Christianity spread and began literally conquering the lands in the north, Christians came up with ways in which they could help their new subjects assimilate easiest into their culture.

For example, Yule was a pagan holiday, and Christians came along and more or less said, "Keep your Yule Trees, fairy tales, and all of that.  We celebrate December 25th as well, for it is Christ's birthday!" And BAM! You have Christmas.  Or, "You celebrate Lussi''s Night?  You don't say! We have a SAINT Lucy and are going to pay homage to her on that night as well! Join in!" BAM! St. Lucia's Night.  "So, you have a weird mythological guy that visits children and encourages them to be good/offers them blessed treats when they deserve it?  So do we..." 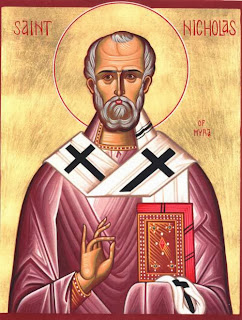 Saint Nicholas, also called Nikolaos of Myra, was a historic 4th-century Christian saint and Greek Bishop of Myra (now known as  part of Turkey) in Lycia. Because of the many miracles attributed to his intercession, he was also known as Nikolaos the Wonderworker. He had a reputation for secret gift-giving, such as putting coins in the shoes of those who left them out for him, and thus became the model for Santa Claus, whose modern name comes from the Dutch Sinterklaas, itself from a series of elisions and corruptions of the transliteration of "Saint Nikolaos." His reputation evolved among the faithful, as was common for early Christian saints. He was supposedly very religious from an early age and according to legend, Nicholas was said to have rigorously observed the canonical fasts of Wednesdays and Fridays. His wealthy parents died in an epidemic while Nicholas was still young and he was raised by his uncle—also named Nicholas—who was the bishop of Patara. He tonsured the young Nicholas as a reader and later ordained him a presbyter.  In 325, he was one of many bishops to answer the request of Constantine and appear at the First Council of Nicaea. There, Nicolas was a staunch anti-Arian and defender of the Orthodox Christian position, and one of the bishops who signed the Nicene Creed.  In 1087, about half of the bones were furtively translated to Bari, in Apulia, Italy; for this reason, he is also known as Nikolaos of Bari. The remaining bones were taken to Venice in 1100. His feast day is the 6th of December. 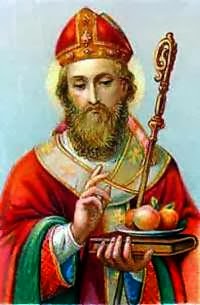 Of course, surrounding him are many legends of his miracles and ministry.  One legend which we discussed earlier when going over the Christmas Pickle tells how during a terrible famine, a malicious butcher lured three little children into his house, where he killed them, placing their remains in a barrel to cure, planning to sell them off as ham. Saint Nicholas, visiting the region to care for the hungry, not only saw through the butcher's horrific crime but also resurrected the three boys from the barrel by his prayers. In some versions of this story, Nicholas ends up making the murderer his servant as penance, and that servant becomes Farmhand Rupert or any other number of Santa's weird mean spirited companions. 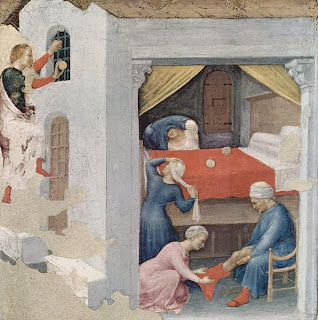 In his most famous exploit, a poor man had three daughters but could not afford a proper dowry for them. This meant that they would remain unmarried and probably, in absence of any other possible employment, would have to become prostitutes. Hearing of the girls' plight, Nicholas decided to help them, but being too modest to help the family in public (or to save them the humiliation of accepting charity), he went to the house under the cover of night and threw three purses (one for each daughter) filled with gold coins through the window opening into the house. One version has him throwing one purse for three consecutive nights. Another has him throwing the purses over a period of three years, each time the night before one of the daughters comes of age. Invariably, the third time the father lies in wait, trying to discover the identity of their benefactor. In one version the father confronts the saint, only to have Saint Nicholas say it is not him he should thank, but God alone. In another version, Nicholas learns of the poor man's plan and drops the third bag down the chimney instead; a variant holds that the daughter had washed her stockings that evening and hung them over the embers to dry, and that the bag of gold fell into the stocking. And from this, of course, we get many of Santa's characteristics such as leaving gifts in stockings or shoes, or in the night, and coming in through the chimney. 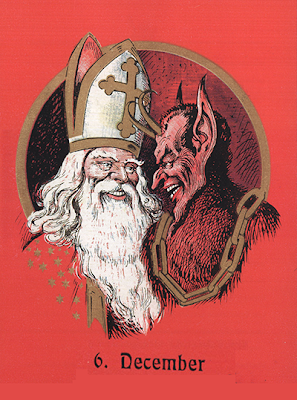 Saint Nick eventually usurped whatever Yule Goat was around at the time, and the Pagan Pukki's various characteristics were eventually split up into numerous variations of the myth.  The goat stuff and whipping was all labeled as "Satanic" since Christians associate the horned livestock with Devils, and has become Krampus.  While all of the good stuff has become our beloved St. Nick.  Another term for the big present giver is Kris Kringle.  A weird name, but this too derives from Santa's identity as a loving Christian. 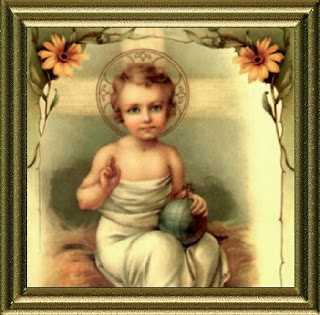 Kris Kringle comes from the term Christkindl, or Christkind, which means The Christ Child.  In fact, some cultures do not have a Santa character but actually have a Christ Child- a little cherub baby type of character -bring the gifts on Christmas day.  And although its original intent was to be the actual infant Jesus, in other cultures the Christkindl has taken on an individual identity as an angelic figure who has evolved past the cherub look and is now a female angel, radiant and beautiful. 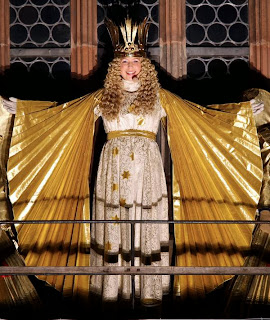 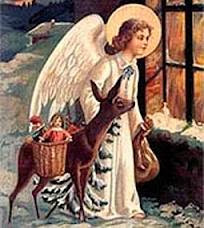 While there are obviously numerous correlations between current Christmas traditions and Christianity involving The Nativity, I will be saving that for a later post.  I wanted to leave this one by showing a lot of the correlation between the character of Jesus and Santa as cited by scriptural accounts of Jesus'/God's character.  Interestingly enough, while some religions proudly flaunt the connections between Santa and Christ, saying that Santa represents the Savior as His disciple around the time of the holidays (a nice sentiment, in my mind) other religions often bludgeon the Santa figure even going so far as to say he's a "False Christ" meant to lead us astray.  All the same, the parallels these days are interesting.