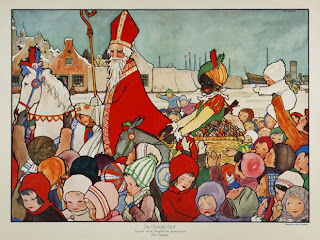 It's interesting that people who were being converted to Christianity held so steadfastly onto their traditions that Christians essentially had to adopt some of them themselves in order to make a smooth transition.  No matter how silly traditions may seem, we as a people hold onto them with a lot of determination.  As I have woven the stories of Santa and his energetic evolution into a myriad of different characters, I have often over-simplified all that has gone into that transformation, and perhaps some of the opposition to that change.  To some, these characters mean far more than what I am saying, and to others they most assuredly mean far less.  However, today's character is one whose complicated nature can hardly be understated because his evolution is still ongoing today. 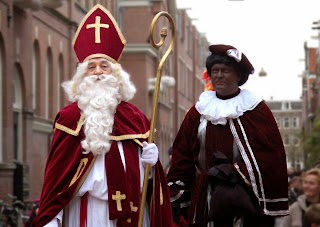 I've mentioned before that Saint Nick very often is accompanied by various companions.  The murderous Rupert, Krampus, the Whipping Father... Sometimes he is even accompanied by the Christ Child himself.  However, perhaps one of the most rampant and well known of his companions is Zwarte Piet, which translates to Black Pete, or Black Peter.

Black Peter is a mideval Moor.  Moors are muslims from Morocco and the surrounding general area, although the term is often used in Europe to define any muslim, particularly those of African or Arabian descent.  He is popularly depicted these days as a blackamoor, with blackface make-up in the tradition of the "darky" character, and dressed in stylized colourful Renaissance attire.  The story most recognized behind his character is that he was a muslim who was converted and tamed into servitude by the Christian champion St. Nicholas.  And because of all of this, he has garnered a lot of controversy. 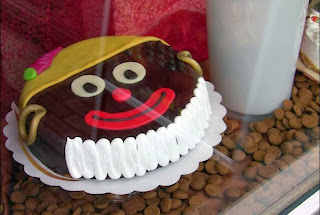 Firstly, the use of blackface is generally considered to be extremely racist. Blackface is a form of theatrical makeup used by white performers to represent a black person, and is considered offensive because it can imply a stereotyped caricature of black people as in popular minstrel shows, and later vaudeville which often depicted black people as bafoons.  Idiotic clowns.  Happy-go-lucky workers.  It also brought about the iconography of the "Darky" character which is googly-eyed, with inky skin; exaggerated white, pink or red lips; and bright, white teeth.  It became a common motif in entertainment, children's literature, mechanical banks, toys and games, cartoons and comic strips, advertisements, jewelry, textiles, postcards, sheet music, food branding and packaging, and other consumer goods.  Black Peter is no exception.  Wearing brightly colored garb with exaggerated earrings and ridiculous blackface makeup, Peter's role is mostly to amuse children, and to scatter pepernoten, kruidnoten and strooigoed (special candies) for those who come to meet the saint as he visits stores, schools, homes and other places.  He is also sometimes depicted as a helper to Belsnickel on his visits. 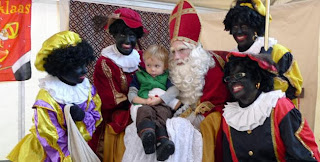 In medieval iconography, Saint Nicholas is sometimes presented as taming a chained devil, who may or may not be black. Although no hint of a devil, servant, or any other human or human-like fixed companion to the Saint is found in visual and textual sources from the Netherlands from the 16th until the 19th century, Zwarte Piet and his equivalents in Germanic Europe, according to a long-standing theory, originally must have represented such an enslaved devil, forced to assist his captor. This chained and fire-scorched devil somehow re-emerged in the 19th-century Netherlands in the likeness of a Moor, as a servant of Saint Nicholas (or the Krampus or Whipping Father, depending on the region). 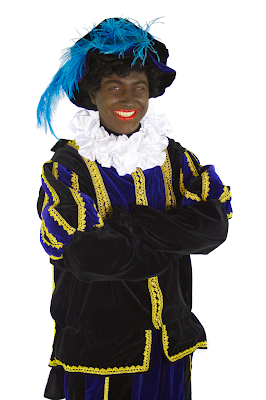 In 1850, Amsterdam-based primary school teacher Jan Schenkman published the book Sint Nikolaas en zijn Knecht ("Saint Nicholas and his Servant"). The servant was depicted as a page boy or man, who appears as a dark person wearing clothes associated with Moors. The book also established another mythos that would become standard: the intocht or "entry" ceremony of Saint Nicholas and his servant involving a steamboat. Schenkman has the two characters arrive from Spain (St Nick's off-season home, according to the legend, and near Morocco where Peter would have originated from). In the 1850 version of Schenkman's book, the servant is depicted in simple white clothing with red piping. In later editions, the page is shown in a much more colorful page costume reminiscent of the Spanish fashion of earlier days, looking much the same as he does at present. The book stayed in print until 1950 and has had considerable influence on the current  traditions.  While in Schenkman's book the servant was nameless, Joseph Albert Alberdingk Thijm already made reference to a dialogue partner of Saint Nicholas with the name "Pieter-me-knecht" in a handwritten, unpublished text in 1850, or "Servant Peter."  Moreover, writing in 1884, Alberdingk Thijm remembered that in 1828, as a child, he had attended a Saint Nicholas celebration in the house of Dominico Arata, an Italian merchant and consul living in Amsterdam. On this occasion Saint Nicholas had been accompanied by "Pieter me Knecht ..., a frizzy haired Negro," who, rather than carrying a rod or bunch of birches for whipping, as is the usual case with Santa' cohort of chums, wore a large basket filled with presents. In 1859, Dutch newspaper De Tijd noticed that Saint Nicholas nowadays was often accompanied by "a Negro, who, under the name of Pieter, is no less popular than the Holy Bishop himself". In 1891, the book Het Feest van Sinterklaas, the servant is named Pieter. Until 1920 there were several books giving him other names, and in contemporaneous appearances the name and looks still varied considerably.  In the early 20th century the Civilized Standard Celebration for children, with Zwarte Piet as the standard personal servant of the saint, spread throughout the country.  During the following years, the character of Zwarte Piet changed into a real friend of children. Zwarte Piet still caries a bag, but in the bag are sweets, which he throws around for all children to pick them from the floor. Also, the number of Sinterklaas' servants multiplied and female Piets were included; this paradigm shift offered the possibility of creating several different Zwarte Piet characters, notably for television. During the televised yearly event, when Sinterklaas arrives by boat, he is often assisted by dozens of Piets, for example there's a Hoofdpiet (Head Piet) who carries the book of Sinterklaas, a Rijmpiet (Rhyme Piet) and so on.  Until the second half of the 20th century, Saint Nicholas' helper was not too bright.  However, recently Peter has become a much more respected assistant of Saint Nicholas, inattentive but playful, and most of the Zwarte Pieten also gained significant skill in acrobatics. 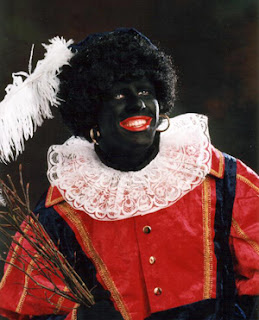 As one can imagine, however, this tradition- though beloved in The Netherlands -has gained some major controversy over the past half century or so. The role of Black Peter has become part of a recurring debate in the Netherlands. Peter continues to draw negative attention from international commentators and news organizations but he continues to be popular in the Netherlands.  Since the 1990s, there have been several attempts to introduce an updated version of Zwarte Piet to the Dutch public, among them replacing traditional black makeup with various other shades of colors, or opting to instead portray him as a chimney sweep who has been covered in soot. In 2006, the Dutch Programme Foundation replaced the black Pieten with rainbow-colored Pieten, along with a new story about how an accident had left them with strange colored skin according to the script of the televised Sinterklaas arrival of that year.  But, so far, there has been no general consensus for what to do with the tradition.  The largest Sinterklaas celebration in Western Canada, slated for 3 December 2011, in New Westminster, British Columbia, was cancelled for the first time since its inception in 1985 following a debate over the inclusion of the character. Rather than remove Zwarte Piet, the organizers cancelled the festivities entirely because, as spokesperson Tako Slump of the organization said, "We got a lot of replies back from our customers in the Dutch community. It became pretty clear to us that we love Sinterklaas and we can't have it without Black Peter. Those two go together."  Also in 2011, legislators in the former Dutch colony of Suriname stated that government-sanctioned celebrations involving Zwarte Piet were considered an insult to the "black part of Suriname's community."  Efforts later began in Suriname to prevent future governmental promotions of the character. Elsewhere, four people wearing t-shirts with the words "Zwarte Piet is Racisme," or "Black Peter is Racist," were arrested during the second weekend of November 2011 at a Sinterklaas festival in Dordrecht. In 2013, following several allegation letters from Dutch civil society organizations claiming that the Black Peter tradition perpetuates racist stereotypes, a number of independent experts and special reporters working under the auspices of the United Nations Human Rights Council wrote a letter to the Government of the Netherlands requesting an investigation into these allegations. The Dutch government responded by stating that the Sinterklaas celebration is a tradition for children in the Netherlands but that different parts of society interpret and perceive it in different ways, thus avoiding responsibility for the character's racist connections. The UN later dropped the charges and assured the Dutch that their Sinterklaas traditions would not be investigated for 'racism', with Marc Jacobs, a Belgian Unesco representative, stating that the person who had signed the letter, Jamaican Verene Shepherd, had no authorisation to do so. As a result of the ongoing controversy, the 600 actors who played Zwarte Piet in the city's annual Sinterklaas celebration on November 17 2013 did not wear the character's traditional golden earrings.  The organizing committee suggested the character's depiction could be altered further in 2014, until something suitable was decided upon, however, this did not stop several hundred people from protesting against the character at demonstrations throughout the city that day. In the weeks that followed, several smaller public and private celebrations opted to feature alternative "colored," "rainbow" or "soot swiped" Peters, already a common sight in Sinterklaas celebrations in North America. But the Dutch public broadcaster Nederlandse Omroep Stichting concluded the trend had not gained mainstream adoption. 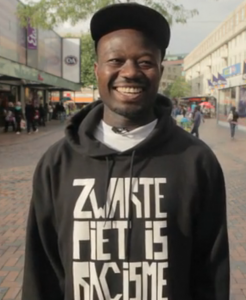