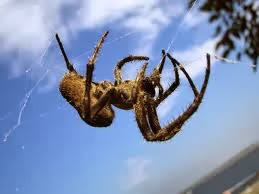 When I think of all of the animals associated with this time of years, my mind tends to think of a plethora of woodland mammals.  Reindeer, little mice, foxes... you know, the sorts of things that come out in winter and frolic through the snow and whatnot.  But apparently it isn't uncommon for many to think of an entirely different sort of creature this time of year as well.  Sporting eight legs, multiple eyes, terrible fangs, and often venomous, some of you may not know that spiders are kinda a big deal to some people around the Holidays. 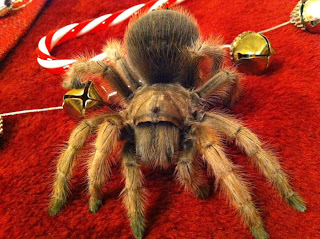 Why is this the case?  I honestly do not know.  For one, insects seem to be pretty scarce during December in the Northern Hemisphere.  For two, there is something very elemental about spiders that makes them scary to most people on a very primal level.  And unlike some of my more recent posts, these spiders aren't meant to be another horrible race of monsters coming to kill you during the holidays!  The Spiders are good guys. 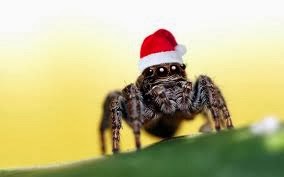 So the story here comes from a bunch of different variations of the same-ish story.  Some versions are about a family, or a widow, or whatever, but ultimately whoever it's about always ends up getting a Christmas tree.  And invariably at some point a spider or a pack of spiders (A gaggle?  A school?  A herd?  How are groups of spiders measured?  What is their unit?- it actually is officially a Cluster, I believe) end up crawling all over it and leaving a trail of silk and webbing.  And then the light hits the tree and it glistens and sparkles and looks really neat, I guess.  And of course, at the end of each version of the story we are told that this "Christmas Miracle" is the reason that we all hang tinsel on our trees today (which I do not, because I think it's kind of ugly). 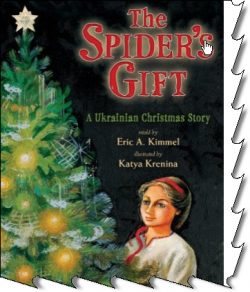 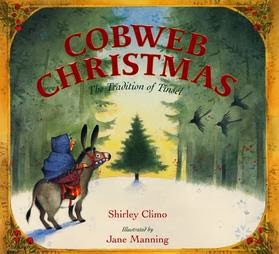 Weird, right?  But we apparently do not only honor the spider's benevolence with tinsel.  Sometimes we apparently place web shaped ornaments or spider-shaped decorations in the tree and around the house.  I've actually found that in the Ukraine this is pretty prevalent.  Very much so.  So if you are ever feeling like you just aren't festive or weirdly European enough, time to bust out any spider-esque Halloween decorations you may have lying around and just plop em around the tree.  It might just do the trick! 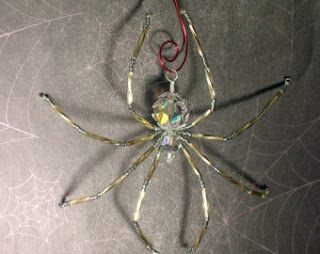 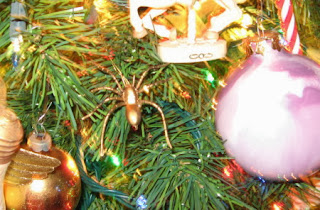 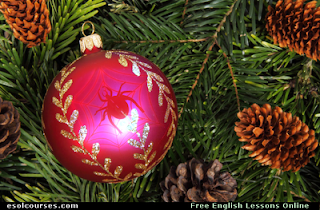 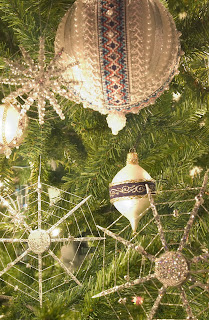 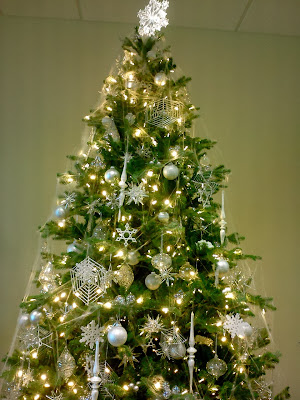 However, while looking at this arachnid-themed seasonal joy, I actually came across another weird traditional thing to place in trees that I'm actually much more familiar with.  No, it's not a scorpion or lobster- though, in keeping with the arachnid thing I'd like to get those up n' running -but rather a cucumber that has been soaked in brine and vinegar.  A pickle. 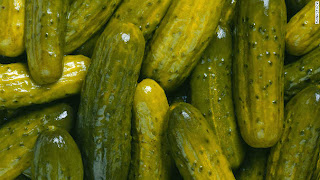 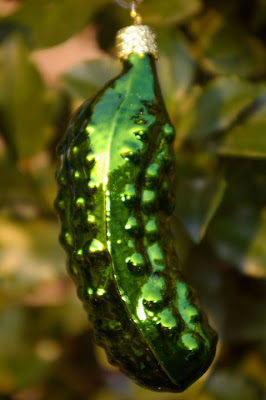 The Christmas Pickle is a traditional ornament in the shape of a pickle and this one is something I have seen on multiple trees throughout my lifetime.  If you haven't and think it's weird, go ahead and type in "Christmas Pickle" into your good friend Google and see what comes up.  This guy is everywhere.  Sort of like the Spider story, the origins for this one are way muddled and there are about a gazillion different "legends" telling totally different stories about where it came from.  It would seem that the popular belief is that this tradition began in Germany, but it would seem that the tradition is actually much more common over in the United States.  I'll just paste in some of the weirdo origins that Wikipedia came up with: "It has been suggested that the origin of the Christmas pickle may have been developed for marketing purposes in the 1890s to coincide with the importation of glass Christmas tree decorations from Germany. Woolworths were the first company to import these types of decorations into the United States in 1890, and glass blown decorative vegetables were imported from France from 1892 onwards. Despite the evidence showing that the tradition did not originate in Germany, the concept of Christmas pickles has since been imported from the United States and they are now on sale in the country traditionally associated with it. One suggested origin has been that the tradition came from Camp Sumter during the American Civil War. The Bavarian-born Private John C. Lower had enlisted in the 103rd Pennsylvania Infantry, but was captured in April 1864 and taken to the prison camp. As the story is told, on Christmas Eve he begged a guard for a pickle while starving. The guard provided the pickle, which Lower later credited for saving his life. After returning to his family, he began a tradition of hiding a pickle on their Christmas tree each year.  Another origin which comes from Berrien Springs is a Victorian era tale of St. Nicholas saving two Spanish boys traveling home from boarding school for the holidays, and when they stopped at an inn for the night they were killed by the evil impish innkeeper and shoved into a pickle barrel (this one, on a personal note, is probably my favorite proposed story, though it should be noted there is a completely 100% identical legend in that country which tells of the boys being stuffed in a bin for meats for pies rather than pickles, which makes entirely more sense... who'd wanna eat pickled students?).  St. Nick finds their remains and brings them back to life somehow.  Traditionally, an ornamental pickle is placed on a Christmas tree as one of the Christmas decorations, and on Christmas morning, the first child to find the pickle on the tree would receive an extra present from Santa Claus or would be said to have a year of good fortune. Berrien Springs, Michigan is known as the Christmas Pickle capital of the world, and holds a yearly pickle festival in early December. A pickle parade has been held since 1992. The village is in the area of Michigan known for cucumber production."

So there you go.  Whether it's eight-legged-freaks for briny-vegitable-freaks, it seems we have all been born with the compulsive need to put weird stuff on our Christmas trees. 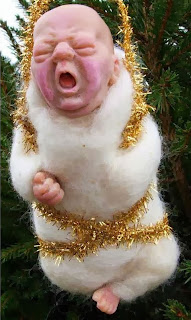 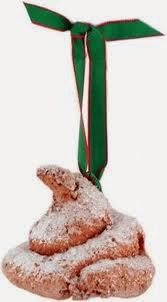