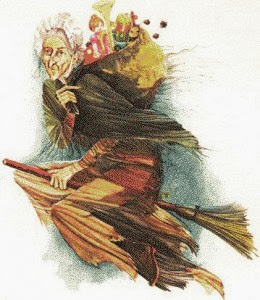 If this year has taught us anything it's that demons, trolls, goblins, and spiders aren't just for Halloween. It seems all of these guys have a deep rooted love for the Christmas season as well!  And witches are no exception.  In Italy a witch named Befana has been dubbed The Christmas Witch. 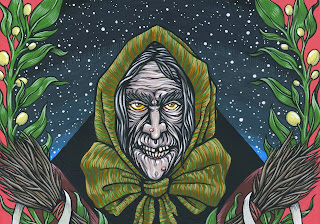 Befana is a witch who travels throughout the land delivering gifts to children on Epiphany Eve, or January 5th.  I guess, in a way, she helps ends the twelve days of Christmas in an exciting way.  All the same, this witch of the Holiday season visits the households of children and, exactly like Santa, she fills their stockings with gifts and candy, and leaves lumps of coal for bad kids.  She also uses her broom (which she flies around on in classic witch style) to sweep houses before she leaves, as she is a compulsive housekeeper.  It's just in her nature.

Her origins have largely been lost, though there is plenty of evidence linking her to a Roman Goddess named Strenua or Strenia, who was a goddess of renewal and the new year.  Befana appears to be either a disciple or heir to Strenua, honoring her legacy by delivering gifts and whatnot at the turn of the year, but like I said, evidence to this is scarce and we may never truly know.  Whatever the reason, a heavily Christianized legend now exists surrounding the character that has expanded into an ever growing mythos of stories. 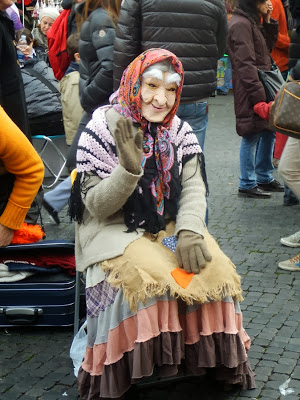 Myth tell us that Befana was visited by the biblical magi (or the The Three Kings/Wise Men which will be talked about in greater detail at a later date) a few days before the birth of the Infant Jesus. They asked for directions to where the Son of God was, as they had seen his star in the sky, but she did not know. She provided them with shelter for a night, as she was considered the best housekeeper in the village, with the most pleasant home. The magi invited her to join them on the journey to find the baby Jesus, but she declined, stating she was too busy with her housework. Later, however, Befana had a change of heart, and tried to search out the astrologers and Jesus. That night she was not able to find them, so to this day, La Befana is searching for the little baby. She leaves all the good children toys and candy or fruit, while the bad children get coal, onions or garlic as she continues her search year after year. 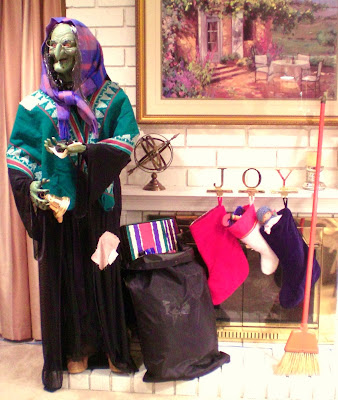 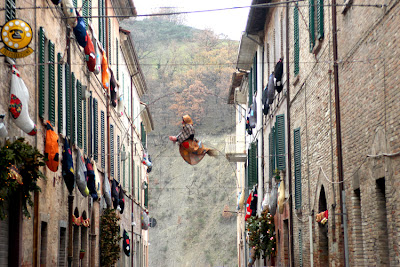 However, there are other well known Christian legends about her that take a much more delightfully darker tone.  These state that La Befana was an ordinary woman with a child whom she greatly loved. However, her child died, and her resulting grief maddened her. Taking up witchcraft, she was, for a time, a psychotic kidnapper.  However, upon hearing news of Jesus being born, she set out to see him, delusional that he was her son. She eventually met Jesus and presented him with gifts to make him happy. The infant Jesus was delighted, and he gave La Befana a gift in return; she would be the mother of every child in Italy.  Every Epiphany Eve she makes good on this gift by rewarding her children with gifts, and sweeping their homes, while leaving the naughty children with less favorable gifts in order to teach them a lesson.  And as she has done this she has become much more kindly and loving, and less mad and raving.  But, she is still not entirely kind, for popular tradition tells us that if someone sees La Befana one will receive a thump from her broomstick, as she doesn't wish to be seen. This aspect of the tradition may be designed to keep children in their beds while parents are distributing candy (or coal) and sweeping the floor on Epiphany Eve. 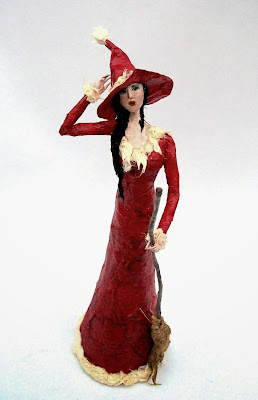 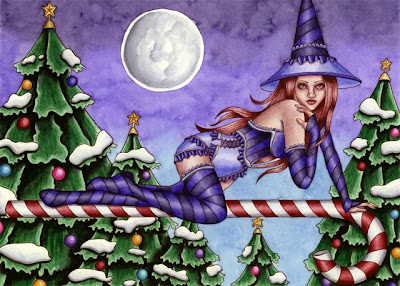 These days Befana has become a national icon in Italy, and the tradition is spreading in various parts of the globe.  And while she is traditionally seen as appearing like any witch- old, haggard, riding a broom, conjuring potions, and all the usual shenanigans -she is commonly being portrayed as more and more youthful and beautiful in some circles.  Some people even claim she is a ravishing temptress desiring only to spread Christmas cheer.  Either way, no matter how it's sliced, Befana is becoming an integral part of Christmas lore in her part of the world, just like Santa or any other Christmas character.
Posted by Anthony at 10:07 AM