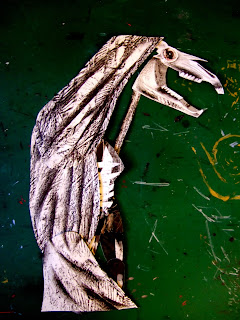 Saddle up!  Alright, so it seems that ancient Europe is not scant on traditions involving dressing up as horrible things and demanding drinks from house to house.  Today's tradition is an ancient Welsh practice called Mary Lwyd, which translates to Grey Mary in English.  The origins to this one are almost entirely lost, but we do know it has Pagan origins or some sort and likely had to do with celebrating the New Year or Yule.  Generally Mari Lwyd would visit during a period stretching from Christmas into the mid to late days of January, although these days, if practiced, it is generally restricted to December. 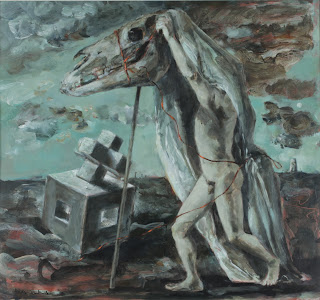 A luck-bringing ritual, Mari Lwyd consists of a mare's skull which was either real or fashioned out of wood (or cardboard, as the case has been when run by children) fixed to the end of a wooden pole; a white sheet is fastened to the back of the skull, concealing the pole and the person carrying the Mari. Two black cloth ears are sometimes sewn onto the cloth, making it look extra horrible, and the eye sockets are often filled with green bottle-ends, or other colored material. The lower jaw is sometimes spring-loaded, so that the Mari's 'operator' can snap it at passers-by or householders.  Colored ribbons are usually fixed to the skull and small bells attached to the reins by which the Mari is "led."The Mari party, made up usually of about five or six men, often had colored ribbons and rosettes attached to their clothes, and they sometimes wore a broad sash around their waists.  There was usually a "leader" smartly dressed, who carried a staff, stick, or a whip to lead Mari around, and sometimes there are other stock characters, such as the Merryman, who played music. 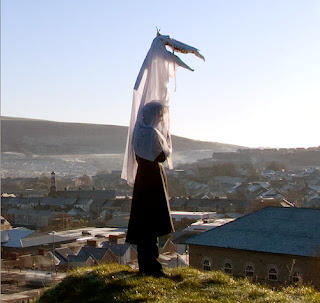 During the ceremony, the skull is carried through the streets of the village by the party, until they come to a house or pub which they want to visit.  They stand in front of the door and begin singing traditional songs, sometimes consisting of freestyle rhyme contests between the Mari party and the inhabitants of the house.  Yes, you read that right.  An undead horse and its band of merrymaking men enter into a rap battle with the inhabitants of the village.  These contests can last for some time, until one side gave up.  But in some places where people are less lyrically gifted the rap battle does not take place and instead they just sing some traditional carols.  If the traditional carols were sung, the inhabitants of the building could decide to grant them entrance, but traditionally, if the Mari side lost the rhyme contest, they would have to leave without being admitted to the house or pub, but this was probably a very rare occurrence, as the party's entry into the building brought good luck, so they would usually be allowed to win.  Once inside, the entertainment continued with the Mari running around neighing and snapping its jaws, creating havoc, and frightening children while the Leader pretended to try to restrain it. The Merryman played music and entertained the householders.  I can just imagine what weird parents took glee in letting this horse ghost into the house to terrify their panicked children- all put to the backdrop of some merrymaker's songs. Sometimes the Mari party would create a serious mess in the house, breaking things even, and would thus not be allowed entrance the following years (even though it would likely be a group of different people).  However, generally, the tomfoolery was lighthearted and the participants would be rewarded with cakes and ale, and sometimes received a gift of money as well. The visit concluded with a traditional farewell song. 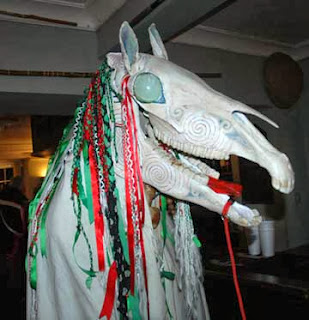 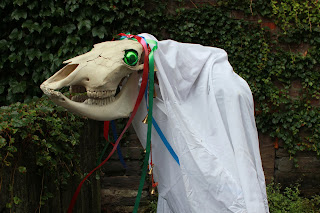 Yup.  Ghost Horse.  Singing.  Rap Battle.  Horrifying rampage throughout the house.  Payment. And some more singing.  This is the way the Mari Lwyd do.  Like I said, the origins of this tradition seem to be lost, which is a serious bummer, but ancient Europeans appear to have pretty much enjoyed any excuse possible to annoy people by dressing up as an animal. 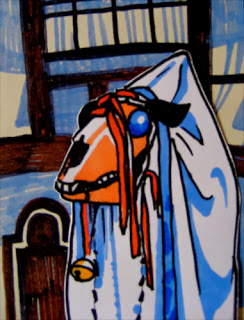 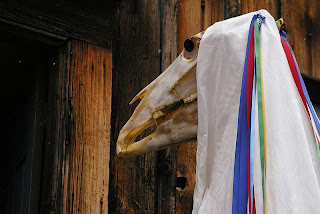 In fact, in a book called Ritual Animal Disguise, the author, E.C. Cawte, mentions that there are not only numerous "animal disguise rituals" but also numerous Mari Lwyd type traditions.  In particular he mentioned on custom called Bwca Llwyd, which has been translated as "grey bogy,"  and involved a similarly constructed animal with more leather involved causing havoc on Halloween of all nights.
Posted by Anthony at 9:57 AM