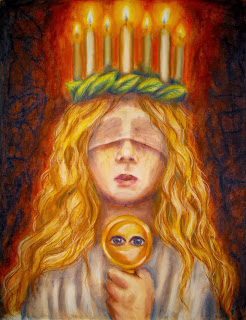 Today is indeed a very special day.  It is Friday the 13th of December.  No, it's not only special because today is the day that The Hobbit 2 came out today (though I am a major fan of fantasy films at Christmas time. They just match the ever-present fairy tale type atmosphere of the season!).  And no, it's not JUST because it's Friday the 13th- the day of mega ultra bad luck the world over.  No, today in the countries of northern Europe, is St. Lucy's Day. 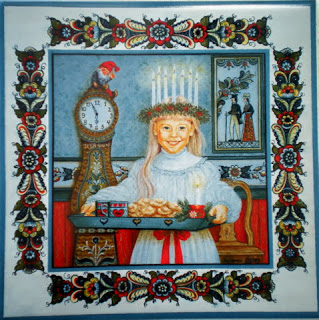 Chances are you are at least passively aware of Lucy's Day.  The imagery from it is iconic- generally personified by a girl with a crown of candles on her head, dressed in white, carrying around trays of goodies.  It's also strongly associated with various age old Festival of Lights traditions. 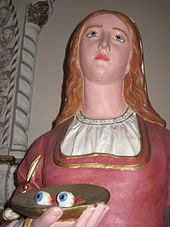 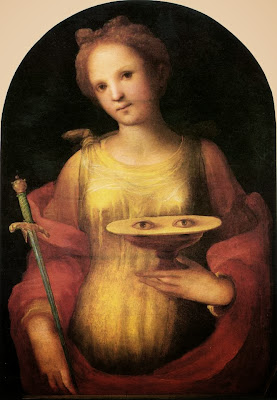 Lucy, or Lucia as she was known in her hometown of Syracuse, Sicily sometime around the third century, achieved martyrdom when a local pagan wanted her for his bride. A devoted Christian through-and-through, Lucia rejected the bridegroom and demanded her dowry be spent on alms. The much aggrieved pagan turned her over to the authorities. After refusing to convert or accept a pagan husband, soldiers tortured Lucia thoroughly. When she still wouldn’t acquiesce, they cut out her eyes. Legend has it that even without eyes she could still see and declare her Christian commitment. However, some stories claim that Lucia cut out her own eyes to spite her pagan suitor and demonstrate her faith in God. This gory history is the reason why Lucy is often seen serving up a platter of eyeballs.  Interestingly, St. Lucy is one of the few Catholic saints that gets much play outside of Catholicism- which is likely because of the ancient celebration of a pre-Christian figure well-known in Scandinavia named Lussi–a witch-like spirit that road around at night with a nasty posse of trolls and evil elves. 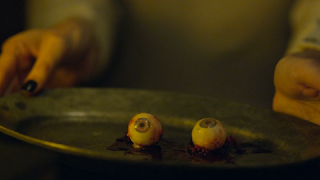 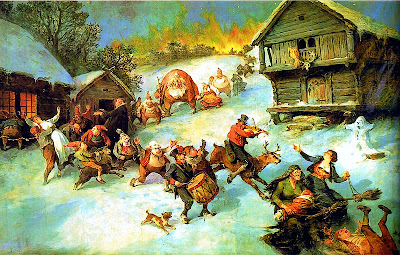 Lussi Night, or Lussinnata, was celebrated on the 13th of December, and the belief was that during the time between Lussi Night and Yule was the time in which trolls and other various monsters were the most active.  And the trolls would essentially some out and just terrorize everybody in their path.  Similar to the idea from an earlier post about goblins coming out during the twelve days of Christmas because they were the darkest, it was commonly believed in Scandinavia as late as the end of the 19th century that this was the longest night of the year, coinciding with Winter Solstice (spoiler alert- it isn't).  While this does not hold for our current Gregorian calendar, a discrepancy of 8 days would have been the case in the Julian calendar during the 14th century, resulting in Winter solstice falling on December 13. With the original adoption of the Gregorian calendar in the 16th century the discrepancy was 10 days and had increased to 11 days in the 18th century when Scandinavia adopted the new calendar, with Winter solstice falling on December 9.  Overall though, it is very difficult to tell the exact date of the Winter solstice without modern equipment, so ultimately a lot of that was pretty ok as far as guess work is concerned. The choice of 13 December as Saint Lucy's day, however, obviously predates the 8 day error of the 14th century Julian calendar. This date is attested in the pre-Tridentic Monastic calendar, probably going back to the earliest attestations of her life in the 6th and 7th centuries, and it is the date used throughout Europe. 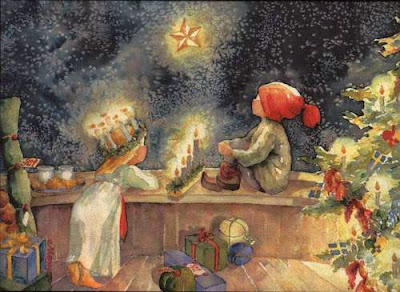 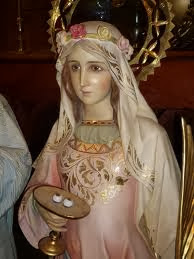 In Sweden, Denmark, Norway, and Finland, Lucy is called Lucia- making it St. Lucia's day.  She is venerated on December 13 in a ceremony where a girl is elected to portray Lucia. Wearing a white gown with a red sash and a crown of candles on her head, she awakens her family and household in the morning by singing "Santa Lucia" (a carol about the title character) and serves everyone breakfast.  Saffron buns (St. Lucia buns) are the usual delicacy of choice.  She also often walks at the head of a procession of women, each holding a candle for a festival of lights. The candles symbolize the fire that refused to take St. Lucia's life when she was sentenced to be burned. The women sing the Lucia song while entering the room, to the melody of the traditional Neapolitan song Santa Lucia; the Italian lyrics describe the view from Santa Lucia in Naples, while the various Scandinavian lyrics are fashioned for the occasion, describing the light with which Lucia overcomes the darkness. Each Scandinavian country has their own lyrics in their native tongues. After finishing this song, the procession sings Christmas carols or more songs about Lucia. 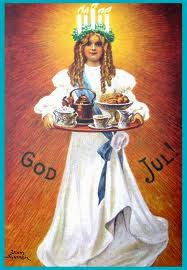