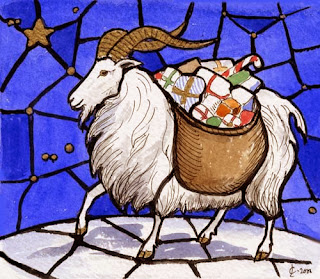 While a whole host of creatures from the animal kingdom can be associated with the Christmas season (reindeer, polar bears, yule cats, and bumbles to name a few), there is one that may actually deserve the spot as Christmas Mascot more than the others.  And that animal is the Goat.  This may surprise you, but the Yule Goat may have actually been dropping off presents during the Holiday season years before Santa or any of his like minded contemporaries, and well before Nativity scenes and Christianity became entwined with Yuletide traditions.  In fact, it is likely that all Santa-esque Christmas characters may have been spawned from... well... a goat.

The Yule goats origins came about in Pagan times of old in Scandinavia.  A popular theory is that the celebration of the goat is in connection to the Norse god Thor, who rode through the sky in a chariot drawn by two goats who were named Tanngrisnir and Tanngnjóstr, similar to Santa and his hoofed modes of transport. It is also known that in old agricultural Scandinavia, the last sheaf of corn bundled in the harvest was credited with magical properties as the spirit of the harvest and saved for the Yule celebrations, called among other things "julbocken" (the Yule goat). 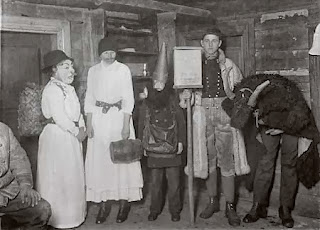 The function of the Yule goat has differed throughout the ages. In a Scandinavian tradition similar to wassailing, held at either Christmas or Epiphany, young men in costumes would walk between houses singing songs, acting out plays and playing pranks. This tradition is known from the 17th century and continued in places into the early 20th century. The group of Christmas characters would often include the Yule goat, a rowdy and sometimes scary creature demanding gifts.  A man-sized goat figure is known from 11th century celebrations of Childermas, where he would visit houses sometimes led by a man dressed as Saint Nicholas, symbolising his control over the Devil, similar to Santa's control over Krampus and the like. 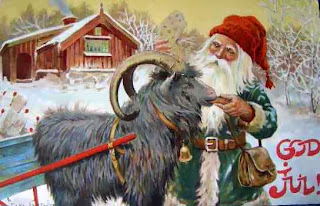 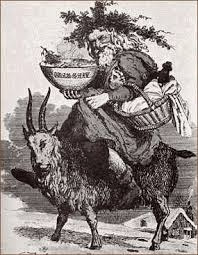 Other traditions are possibly related to the sheaf of corn called the Yule goat. In Sweden, people thought of the Yule goat as an invisible spirit that would appear some time before Christmas to make sure that the Yule preparations were done right. Objects made out of straw or roughly-hewn wood could also be called the Yule goat, and in older Scandinavian society a popular Christmas prank was to place this Yule goat in a neighbor's house without them noticing; the family successfully "pranked" had to get rid of it in the same way. Sort of like a chain letter, only it's a chain-wooden-goat. 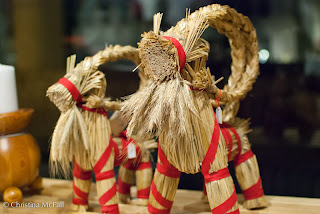 During the 19th century the Yule goat's role all over Scandinavia shifted towards becoming the giver of Christmas gifts, with one of the men in the family dressing up as the Yule goat. In this, there might be a relation to Santa Claus and the Yule goat's origin in the medieval celebrations of Saint Nicholas.  The goat was eventually replaced by Father Christmas, Santa Claus, or any other more Santa-esque beings by the end of the century, although he is still quite curiously called the Yule goat in Finland- which will be discussed in a later blog post..  Many depictions of the Santa-type characters show them riding the goat around rather than reindeer, which is still somewhat common today- however, aside from being probably assimilated into characters like Krampus, the tradition of the man-sized goat has disappeared. 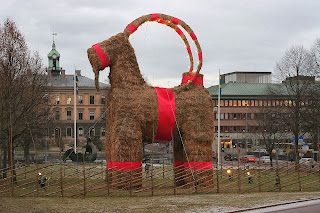 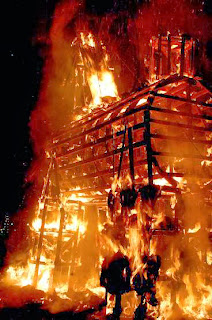 The Yule goat is best known today as a Christmas decoration or ornament. This modern version of the Yule goat figure is a decorative goat made out of straw and bound with red ribbons. Large versions of this ornament are frequently erected in towns and cities around Christmas time – which tend to be set on fire before Christmas. The Gävle goat was the first of these goats, and remains the most famous. The Gävle Goat is located at Castle Square in central Gävle, Sweeden, and is a ginormous version of the currently traditional Yule Goat figure made of straw. It is erected each year over a period of two days, and has often become the subject of a 'tradition' of regularly being torched by vandals.
Posted by Anthony at 2:58 PM